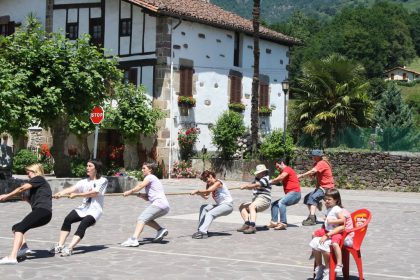 Another guest post from Veronica of La Recette du Jour.
Being in a country where you don’t speak the language well enough to understand everything that’s going on gets you into some odd situations where you can discover all sorts of interesting things you would never have guessed the existence of otherwise. Yesterday was one of those days. ”Dia de la sidra” in Leitza, said the Navarran tourist authority website. “Cider tastings.” Sounds good, and we haven’t visited Leitza yet. So we get in the car and set off, arriving at about 11 a.m. Absolutely no sign of any cider festival. As usual walls and shop windows were plastered with fly-posters, 100% of which were in Basque. But by using the few words of Basque we do recognise and looking at the pictures, we soon determined that none of them were anything to do with cider.

Steve asked in a haberdasher’s shop; the two women inside shrugged their shoulders. Try the square where the town hall is, they suggested. So we did. Still no cider festival; we studied a few more posters without success, as usual taking photos of some of them so that we could decipher them with the help of the Basque-French dictionary later. On the way back down the hill we asked in a newsagent. “Oh yes, el dia de la sidra. It’s this afternoon. At seven o’clock.” Hmm. To us, “dia” had implied “all day”. And to the Spanish, “afternoon” starts at about four and goes on till nine. Leitza didn’t look so interesting that we wanted to hang about till seven in the hope that a couple of stalls selling cider might appear. “Let’s go the butcher’s shop near where we parked the car,” I suggested. “I want to buy some chicken for dinner.”

The window of the butcher’s had a poster in it (in Basque) which seemed to be an advert for a museum of stone-cutting. Inside, the walls were plastered with photos and newspaper cuttings showing large sweaty men heaving improbably large blocks of stone onto their shoulders. Ahh, harrijasotzaile (Basque stone lifters)! “My dad,” said the butcher proudly. “And my brother.” “What about you?” asked Steve, eyeing his slim, thirty-something frame doubtfully. “I like partying too much,” he grinned. “It’s our family museum – it’s open till two-thirty if you want to see it.” Well, we didn’t have anything better to do, so we drove out of town and followed a large pointing finger sculpted in concrete up a steep track.

We arrived at a farmhouse overlooking a field. In the field were a giant Basque beret, a few stone circles, dolmens, and menhirs, standing stones with letters painted on them, an 8-metre tall statue of a man with a spherical stone on his shoulder, painted in brilliant silver, and an even more massive silver arm and shoulder emerging from the earth. The usual ponies and sheep appeared unconcerned by this, grazing calmly around the giant legs of the statues, and scratching their backs on the menhirs. 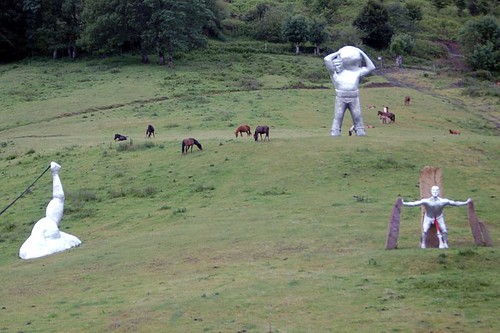 There was a bus parked outside the farmhouse, and when we went inside about 40 people were milling round a table drinking cider and eating pintxos. TV screens on the walls were looping images of the butcher’s dad heaving stones onto his shoulder. A 50-ish woman with jet-black hair and the figure and general appearance of a flamenco dancer bustled up to us. She looked less Basque than we do. “Gabble gabble gabble,” she said. I’d been congratulating myself only the previous day on how much better I was at understanding people, but now I felt I’d been put on a magic carpet and whisked off to Andalusia. I could barely understand a word she said. Her less frenetic daughter, who had the blonde hair and pretty, round face more typical of Basques, then approached and between us we managed to establish that no, we weren’t part of the coach party, no we weren’t in a hurry, and yes, we’d love to be shown around the museum with the visiting party. “My mother does speak rather fast,” apologised the daughter, handing us a glass of orange juice each and a plate with a couple of croquetas on it. “I hope you can understand her.” 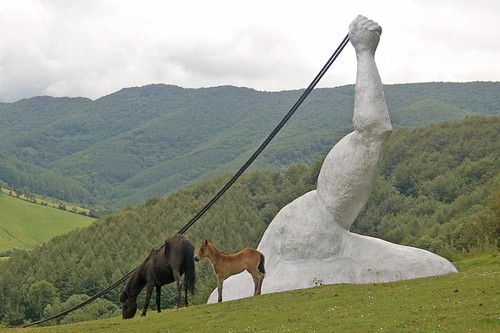 After we’d watched the video, the flamenco dancer, who turned out to be the wife of Mr Perurena senior, the stone lifter, gathered us around the stone-lifting paraphernalia in the centre of the room, and firmly gripped the edge of a 100-kg stone block with her manicured hands. Surely she’s not going to … No, she wasn’t, she was just explaining the correct method of lifting the stone to your chest, turning it end-over-end, and then hitching it up bit by bit to your shoulder, whereupon you drop it onto a strategically-placed tractor tyre; unless you’re going to show off first by rolling it around your neck half a dozen times (if it’s a sphere) or marching round the room with it balanced on your shoulder.

After this she explained the significance of the various sculptures in the field (mythology … identity … Basque history … language … poetry … constructed metal frameworks for the statues … brought and poured all the concrete by hand – I only grasped odd phrases of this). Then we were taken to the museum, which was a mixture of items related to the use of stone in general and to her husband and son in particular. We tried to follow her rapid-fire commentary; it was one of the occasions when I truly regretted not having a better command of Spanish, because her anecdotes were obviously highly entertaining and she often had the crowd roaring with laughter. 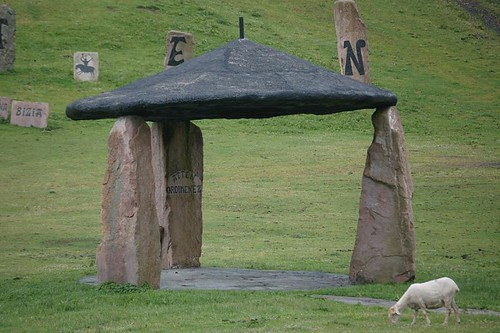 But looking around at the photos, certificates, and newspaper cuttings on the walls, it gradually began to dawn on us that her husband, Iñaki, and her son, er, Iñaxio (I have revised my estimate of the proportion of Basque men called Iñaki or variations thereof to 66%), were Very Important Stonelifters. Broad-shouldered, puffball-faced giant Iñaki had set the world record for lifting a stone of 322 kg onto his shoulder – we’d seen a video of him doing this, and the Guinness Book of Records certificate displayed here confirmed it. La Force Basque à Bercy, proclaimed posters bearing witness to Iñaki’s international reputation, doing demonstrations in Paris to crowds of thousands. There were photos of Iñaxio aged about seven lifting a modest 25 kg, at 13 lifting 90, and in his 20s, better-looking and more lightly built than his dad but just as strong, heaving 300-kg plus blocks. Even leaving aside the difference in physique, you could always tell who was who, because father always heaved stones onto his left shoulder, son onto his right.

Upstairs in the attic, the equipment for other less important Basque sports was on show. Woodcutting of course. Stone-piercing (bashing a stone with a pointed metal stick till you make a hole all the way through). Hoe-throwing. Anvil-carrying. Bale-tossing. Do you sense a theme emerging here? Espadrille-tossing. Corncob-gathering. Milk-churn carrying. Yes, really. A photo showed a bunch of elderly men trudging along carrying milk churns. Barriers at the sides of the road were lined with people screaming encouragement as if they were Tour de France cyclists powering up the last few metres of the Alpe d’Huez. 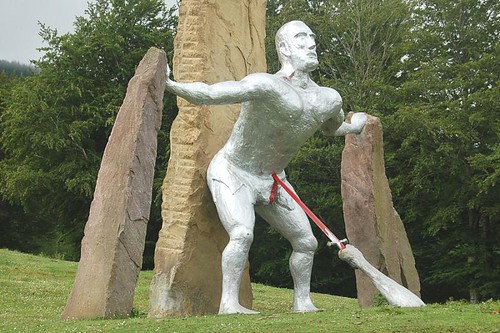 A whole world we never knew existed, with its own stars. Some of these sports may sound laughable at first, but are they any more laughable than a bunch of conceited, overpaid, spoilt brats kicking an inflated pig’s bladder round a field? Nearly all of them represent genuine, useful tasks with their own challenges that needed to be done every day. “We Basques are poor,” claimed Maite, “so we just have to use the materials to hand for our sports.” I wasn’t convinced by this; the houses, the cattle, the churches all proclaim the Basques to be relatively rich by “peasant” standards. I came away with the inescapable impression that deep in the Basque psyche is the need to struggle, to excel, to show “I’m harder than you are,” or even “My ram can beat your ram any day”. Almost every agricultural activity is looked at by the Basque with the thought, “How can I bet on this?”

The museum was also evidence of the fact that Basques (the ones on the Spanish side of the Pyrenees at any rate) truly do believe that they are special, and that their specialness must be preserved and defended against attempts to deny it. A later champion stonelifter (record of 326 kg) Migueltxo Saralegi says in an interview: “I’m sorry, but we are just stronger. It’s the race….We do our tasks. We have a history with the stones. An Italian man with the same muscles can’t pick up our stones, because he has no reason to.”

At home we googled and researched the ins and outs of harrijasotzaile. This is the point at which we realised what global stars the Perurenas are. YouTube videos by the cartload. Articles and interviews. Wikipedia entries. And we’d never have discovered any of it if we hadn’t stepped into the butcher’s to buy some chicken. We never did get to the cider festival.

If you can’t visit the museum yourself, here’s Iñaki Perurena himself talking about it. 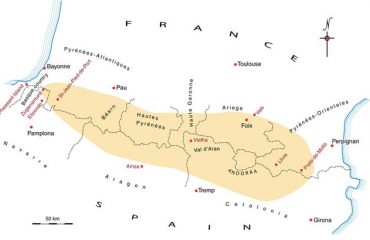 Secrets of the Pyrenees

Carnival Time Again – The Bustle of Life in Ameztia 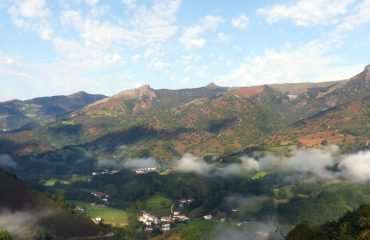