My dear neighbour and friend, Sagrario, lives on the Basque farm next door and is 47 years old. She is more or less of my generation – or so you would think until you heard the stories of her childhood. Only then do I realise the true extent of the cultural abyss between us. Sagrario was born on the farm of Sotillanea, a large Basque farm, just up-stream from my own now run by her younger brother, Juan Angel.  On a snowy morning in January, so icy that they couldn’t even get to the church in Ituren and had to make a sudden dash for the church porticos of Elgorriaga,  she married Ignacio, a Basque lumberjack from the neighbouring farm of Sumbillanea. She has lived there ever since.

Sagrario and Ignacio live with their children, Amaia and Iñaki.  Amaia is  a very pretty hairdresser whose boyfriend, Joseba,  is one of the strongest Basque men in Navarra! (especially known for the ancient Basque sport of lifting carts and ‘chingas’ around the plaza). Iñaki is the younger of the two, a welder and mercifully-gifted mechanic. Both have inherited the glint in their fathers beautiful green eyes.  Ignacio’s unmarried brother, Luis, lives with them too. He is always joshing but is painfully shy; a passionate huntsman with hands as rough as bark and a heart of honey. Frightened by women. Very Basque.

Trying some of Sagrario’s sheep’s cheese

The family of Sumbillanea (for here families are often known by the name of their houses rather than a surname) have looked after me, and my land, ever since I have been here. Most mornings, when Marion was a baby, Sagrario would dispatch Luis off with the sheep and a Tupperware container of pureed home-grown vegetables.  Marion and I would wake to the sound of the bells and try and guess which animals they belonged too. The higher ring of the sheep in the field were the easiest to recognise but, by the age of 2, Marion was usually the first to work out whether there were horses at the gate or cows in the garden. Whatever we found outside the door, Marion’s lunch would inevitably be hanging on the fence.

Sagrario often talks about her lost childhood. She was first put to work looking after her grandmother at around 3 year’s old and remembers sitting vigil by her grandmother’s chair at the fireside for hours on end while the family were out working in the fields.  Her elderly grandmother appears to have had a form of Parkinson’s disease which meant that she would tip forward in her chair from time to time and need to be righted. This job – together with the task of putting logs on the fire – was among Sagrario’s first responsibilities. She remembers clearly passing the hours with just a pair of scissors and a piece of paper that she would cut into evermore diminutive and elaborate shapes until her parents came home.  She had no toys and so she made her own, and when she played at cooking with her sisters they used the heads of camomile flowers for ‘fried eggs’ and dried brown beech leaves for ‘filet steaks’.  When her parents were out they played other sorts of games, raiding of best clean clothes (kept aside for ‘visits to the doctor’ so she says) and dressing up her younger brothers. At the sound of voices in the yard, they would hurriedly undress them and put them back where they belonged. 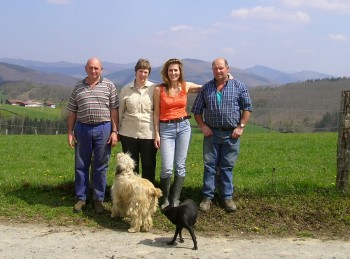 Ignacio, Sagrario, Me and Luis at Sumbillanea in Ameztia

Talking over this article with Sagrario yesterday, Ignacio and Luis chimed in about the toys they invented during their youth.

In the lack of anything like a tin-opener, tins were opened by puncturing the top with a knife and rolling back the lid in strips. With two strips rolled back the tins would look vaguely like cows with horns which, when left outside to rust would take on a reddish huge just like a breed of cattle raised on the local farms. The brothers would then attach two tin cows together with a twig to imitate a yoke, and with a small string attached to the front, would play at leading them along the tiny tracks in the hillside that they had carved out with the tip of a hoe.

The brother who moved his cows furthest along the track without tipping them over would win!

By the time Sagrario was 7 she was sent off to work looking after her younger nieces and nephews at her aunts’ house in the village of Oiz, a lonely 4 km walk down to the valley floor. For the next 7 years she would return home perhaps once a month. In the meantime, while her uncle worked with one of the few tractors in the area, and her aunt helped out at a local inn, she would help look after the house, the children and the cows.  When time allowed, she would attend the local school where the Basque language was banned and where – at first – she understood hardly a word. Sagrario, Ignacio and Luis all agree that the only thing they learned at school was to speak Spanish. Today Spanish is used much more commonly in the villages than it was before.

The brothers’ recollection of their school days is particularly harsh and, although school was (in theory) compulsory between the ages of 8 and 14, with so much work on the farm they would rarely attend more than 5 or 6 days a month. When they did, their mornings started early and by the time school in Ituren started, they had already milked the cows, led the donkey with the milk down the tortuous 4 km track to the village, returned to the farm with supplies, changed clothes and walked back down to school, where cold and tired they would be reprimanded for speaking Basque! 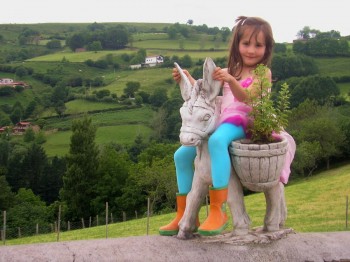 Marion at Sumbillanea. Views of our house to the left and above it of Sotillenea, where Sagario was born

Sagrario, Ignacio and Luis have helped considerably in Marion’s upbringing. They indulge her and spoil her – evidently intent on preserving the joys of her childhood  – a childhood that they all feel that they were denied.

Thank you, Sumbillanea, for all your help! 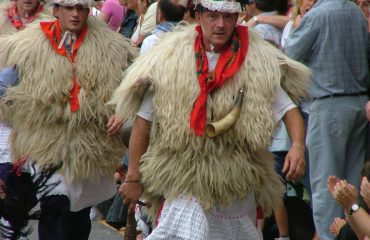 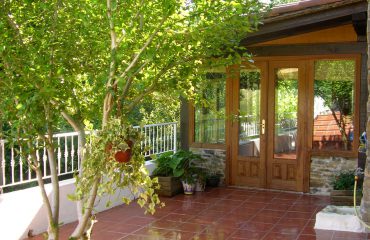 A Portrait of an English Mother in a Basque Pyrenean Sheep Shed. Autumn 2005