The Pyrenees with Michael Portillo

Filming in Zubieta in The Basque Country

Behind-the-Scenes in the Pyrenees with Michael Portillo 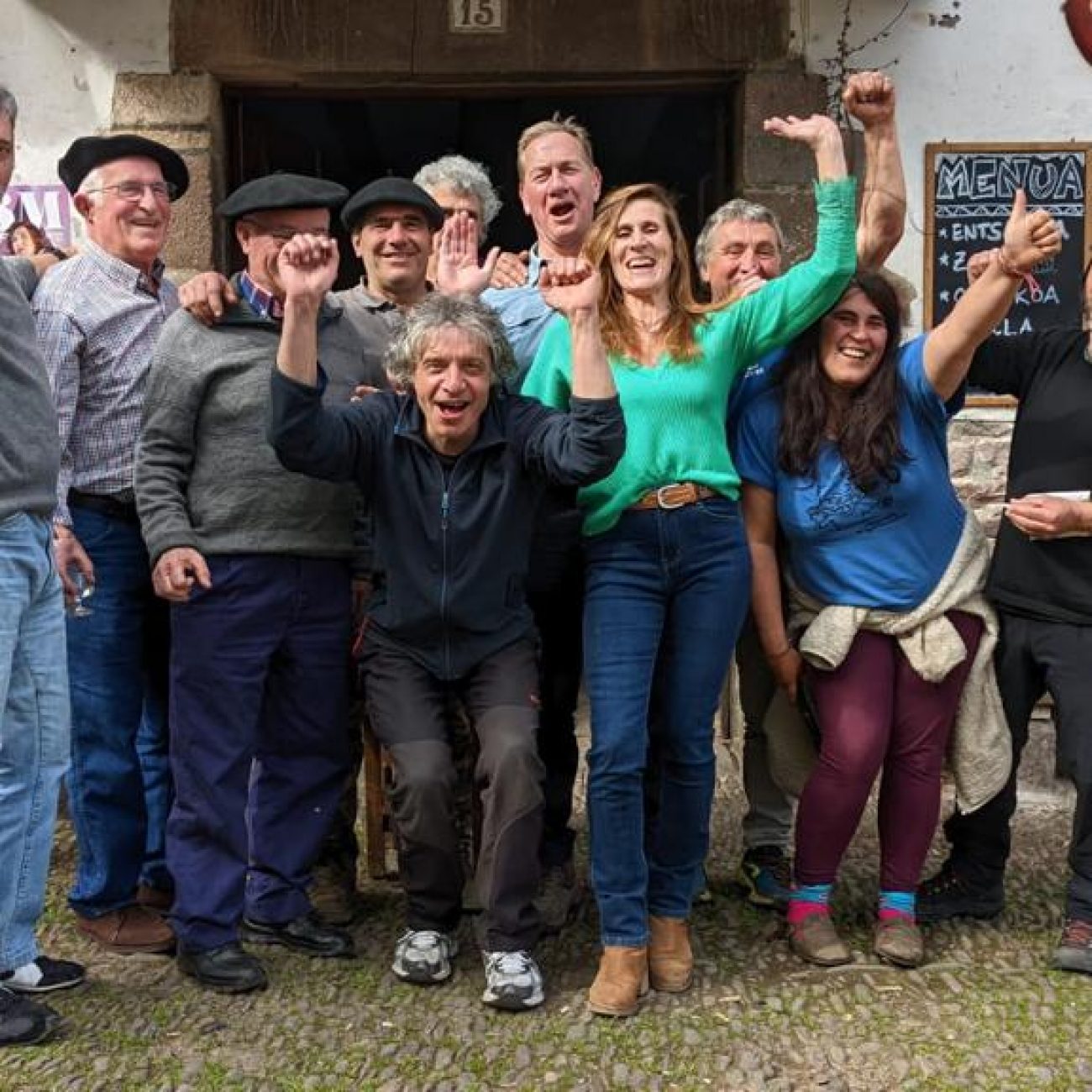 Meeting Michael Portillo in Zubieta in the Basque Pyrenees

‘Better to age in bright colours’. As I prepared for a day's filming with Michael Portillo in Zubieta this March, I recalled the advice of an actress who had once participated in one of my Basque Cultural Walking Weeks.  Several months ago, Curve Media, commissioned with filming ‘The Pyrenees with Michael Portillo’ documentary for Channel 5, asked me whether I would be happy to show Michael around my area and to give him an introduction to ‘The Basques’.

And, as usual, I had jumped at the idea, although a few doubts played on my mind. Would my personal experiences of integrating slowly - but surely - into the heart of Basque mountain life be of sufficient interest for a Michael Portillo documentary? And the second – knowing that Michael, a British politician and BBC journalist, had a similar passion to mine for bright-coloured clothing - was whether our colour codes would clash? I need not have worried about either!

In a sober blue sports shirt, Michael Portillo approached me on the terrace of Zubieta village bar as I shared a coffee with friends at the immense stone-slab table, dolmen-like in proportions. It was an appropriate setting for an episode on these ancient mountain people of unknown origin.

“Ongi Etorri”, I greeted Michael in Euskara, their outlandish, neolithic language, the crown jewel of the Basque culture. And then, microphone snuggly clipped into the hem of my emerald green jersey, camera crew in tow, we strolled out of the square and into the narrow alleyways of Zubieta, this quintessentially Basque village in the Spanish Pyrenees.

Language, Culture and Identity in the Basque Country

Michael's easy eloquence was reassuring. Yet there was a calmness and simplicity about him that I had not expected. Rather than a detailed account of the idiosyncrasies of Zubieta village life, known for the Joaldunak, (the pagan Basque protagonists of the Ituren - Zubieta Carnival), this episode would focus on giving a deeper impression of Basque culture, language and identity. Having spent the past two decades gathering material for ‘Life on a Basque Mountain’ – a recent manuscript of mine based on my struggles as a single British mother bringing up my Basque daughter with the local shepherds - observations on culture and identity were fresh on my mind.

What I had overlooked was that Michael, having been raised in a multi-lingual, multi-cultural family in the UK, held the same themes of language, culture and identity close to his heart too.

“I am sorry, I can be pretty garrulous,’’ I excused my rather ebullient nature from the outset.

“That’s fine”, he grinned, “I am happy to take a back seat for a change!”. No further excuse was needed. 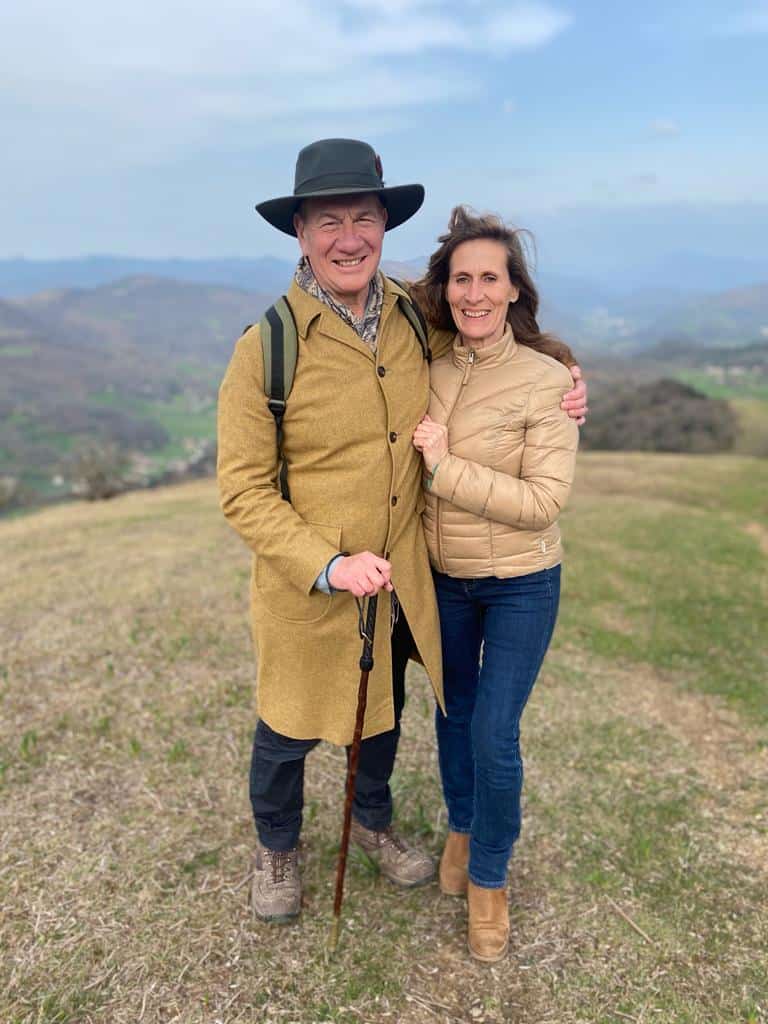 Michael Portillo and Georgina Howard on the ridge tops of Ameztia, Ituren in the Pyrenees where Pyrenean Experience is based.

In 1936, at the outset of the Spanish Civil War, Michael’s father, Luis Gabriel Portillo Peréz, was a Spanish intellectual working as a professor of Civil Law at the University of Salamanca. He joined forces with the Republicans in an attempt to fight off Franco’s military coup but refused to take up weapons to defend himself for fear of killing any of his five brothers, all of whom had been forcefully enlisted into the opposing forces of Franco’s Nationalist party. At the end of the Civil War, Luis Gabriel Portillo found exile in the UK where he ended up working as an instructor at a camp for evacuated Basque children near Oxford. Here he met his wife, Cora, a Spanish teacher, and soon after they were married. 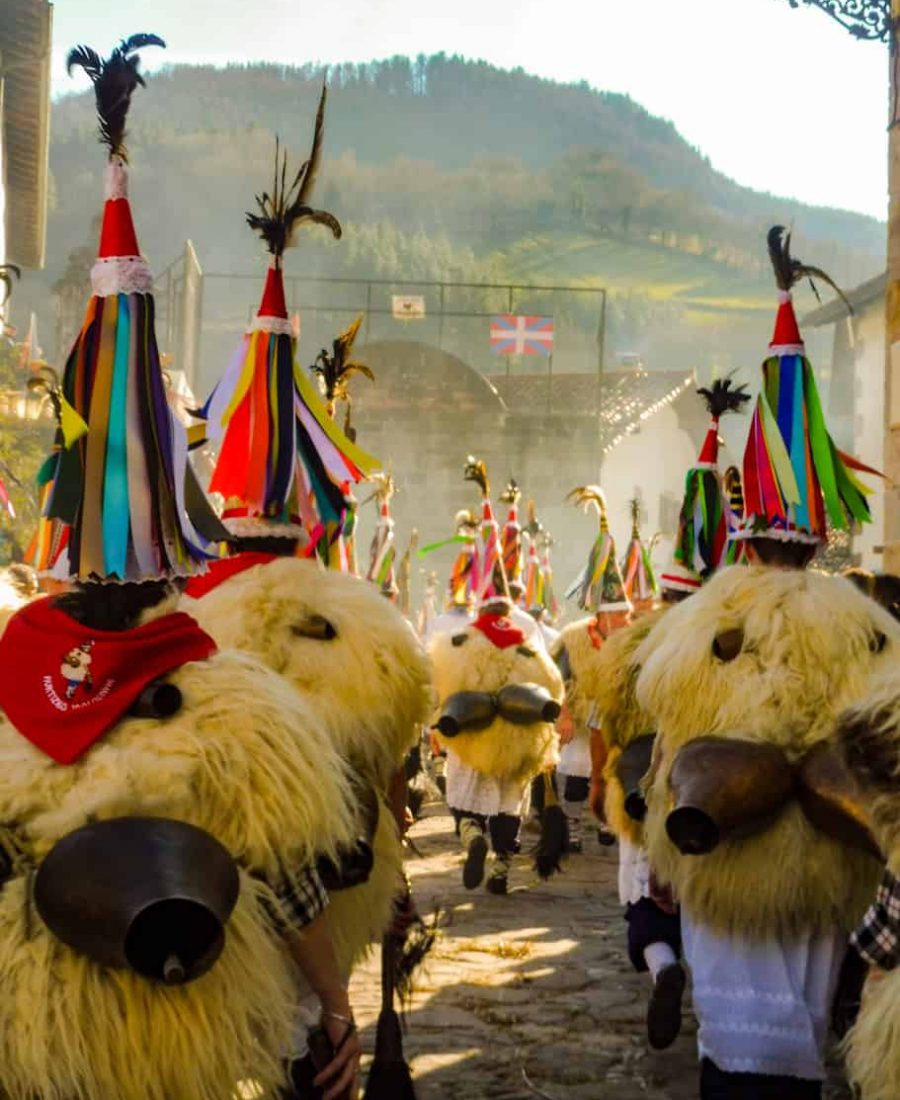 The Joaldunak: protagonists of the Basque pagan carnival of Zubieta and Ituren

A talented, team of linguists at work

As we walked around Zubieta, chatting with the locals, and enquiring about their farming traditions and festivals, Michael's superb language skills came to the fore. Addressing the villagers in fluent Spanish, he would immediately distil the essence of the conversation and summarise it, almost simultaneously, in unfaltering English to the camera. Michael's superb Spanish language skills bore testimony to his multi-lingual upbringing and his father's - not always appreciated - attempts to raise his sons in his native tongue.

Towards the end of the day, Michael voiced a special thank you to the Basque people themselves for, had it not been for the Basque refugee camp where his parents had met, he would never have been born.

Having worked regularly with the media over the past decades, it was enlightening to join Curve Media in the filming of this first episode of ‘The Pyrenees with Michael Portillo’. And, as a language speaker myself, it was fascinating to see this professional team of linguists at work. British linguists are, sadly, few and far between.

From the outset, my very first conversations with Ilana, the documentary researcher, made it obvious that this was a production team who cared. Natasha Newman, the story producer for 'The Pyrenees with Michael Portillo', a Spanish and French language major, showed real respect and concern for all my Basque neighbours and friends, putting everyone at ease and allowing the scenes and conversations to flow spontaneously rather than orchestrating them artificially. And then there was Dave Minchin, the cameraman, who spoke Italian and was possibly one of the most exuberant people I have ever met. Wide-open body language and a smile to match! How he kept the camera still I have no idea because the only image I retain of him in my mind is an absolute blur of movement! 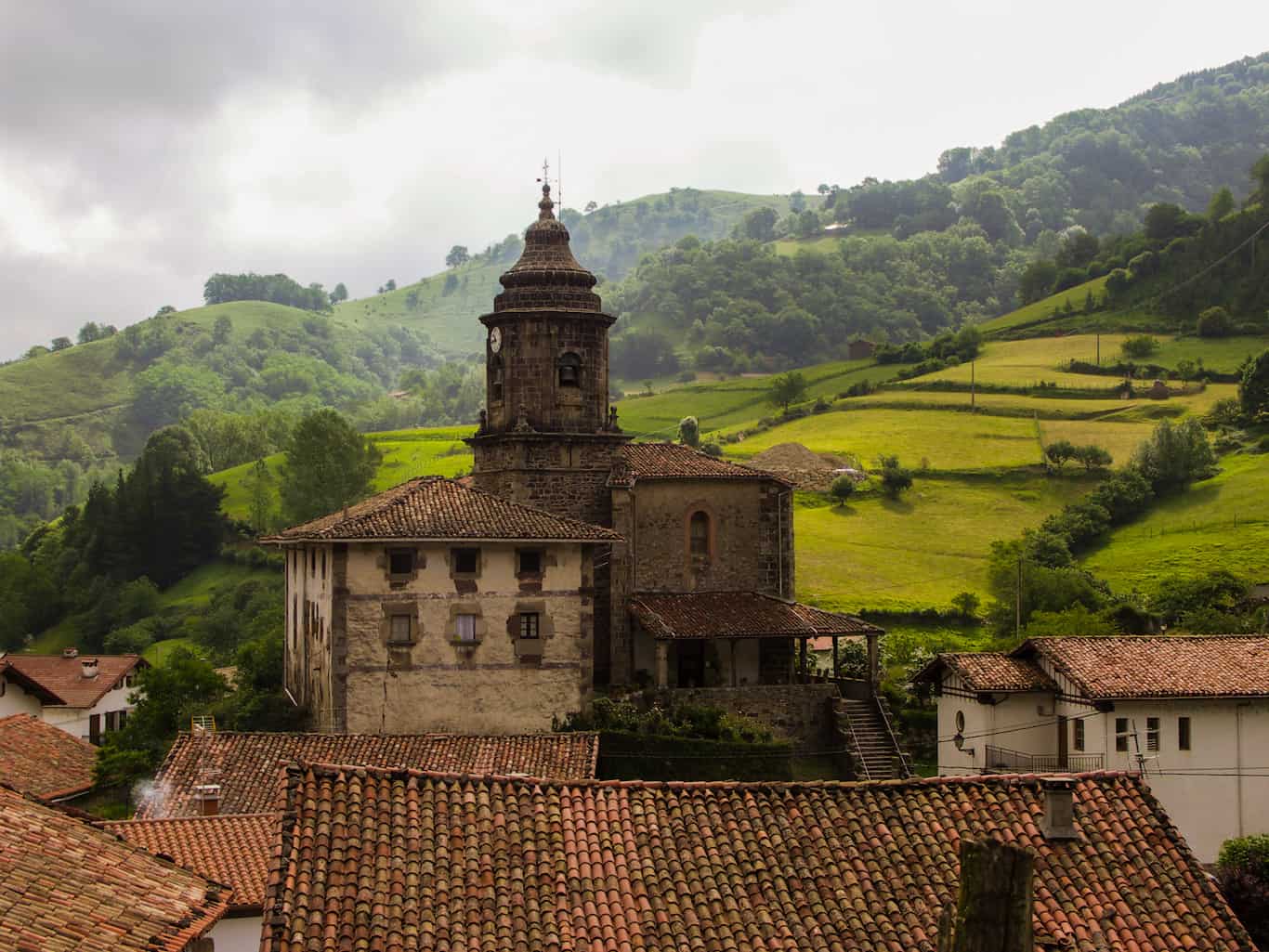 The church in Zubieta in the Spanish Pyrenees 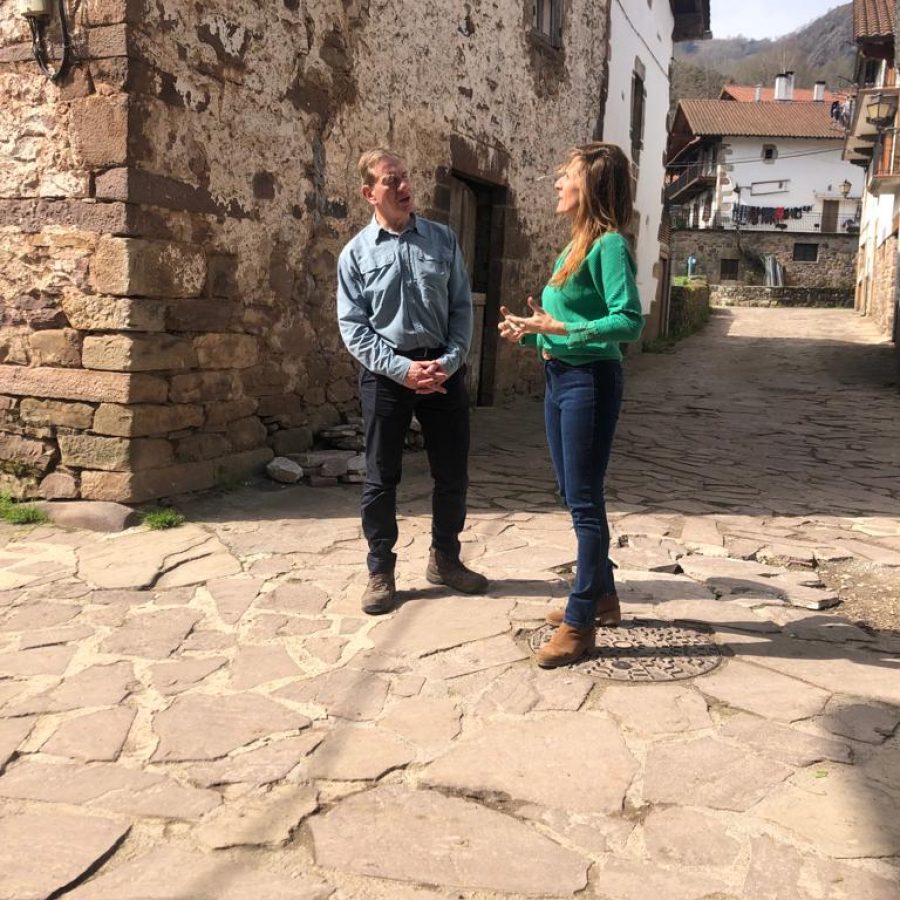 Cultural Exchanges in the Pyrenees

Dave’s drone lessons with the children in my hamlet, executed in his inimitable Italian-Spanish creole (basically Italian with an ‘s’ on the end) will go down in local history.

‘The Pyrenees with Michael Portillo’ documentary – which I have yet to see – will undoubtedly benefit from the skills of a team of professionals who spoke the languages of the people around them and realised the importance of being culturally aware.

Now I can’t wait to see the documentary. And, for anyone who has any doubts, I am the garrulous one in emerald green!

The Pyrenees with Michael Portillo Documentary is due to air on Chanel 5 at the end of August - the beginning of September 2022.

Articles on the culture, languages, traditions and values of the Basque Pyrenees as well as stories taken from over two decades of our own, personal Pyrenean Experience.